In Memory of
Paul
Wannamaker
1945 - 2021
Click above to light a memorial candle. 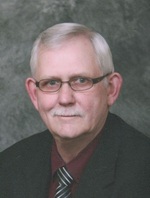 WANNAMAKER, Thomas "Paul"
November 19, 1945- March 11, 2021
Born in Picton, Ontario a cheesemaker’s son, Paul would learn the trade from his father after school. After retiring from a long career as plant manager with Kraft Canada, Paul would return to those roots as a cheesemaker interpreter at Upper Canada Village. Nothing pleased him more than explaining to people the process of cheesemaking and offering a taste of curd.
Summers saw Paul and Audrey busily setting up the camper and spending weekends at their favourite campsites. We spent many pleasant evenings around the campfire into the wee hours.
Mischievous by nature, Paul would never hesitate to accept a role in the Church plays and would be in his glory entertaining. He was in his element as a master of ceremonies or just telling corny jokes to the kids at the Christmas party.
He had great organizational skills. His football pool was epic and he persisted even if the Green Bay Packers did not make the Superbowl. No sports season would be complete for Paul without hockey and he would install himself in front of the TV wearing his beloved Boston Bruins sweater and holding the bullhorn to be used when they scored. He umpired baseball for many years and his example was used in training new umpires. He also coached minor hockey, refereed hockey and was vice-president of the Cornwall Curling Club.
Paul served faithfully on the Ingleside St. Mathew’s Presbyterian Board of Managers for many years. It was important to him to attend church services and enjoy the fellowship lunch afterwards engaging with his fellow community members.
Survived by his wife Audrey (Koelmans) Wannamaker, by sons Brad and Jeff Wannamaker (Lisa) and his adored grandson Brayden and stepsons Joe (wife Kim) and their daughter Erica, Tom (wife Andrea) and their children Criseyde, Gracie, Byron and Hadrian and Jon (wife Roxanne) and their children Kaiden and Riley Adams. He was predeceased by his parents Tom and Florence Wannamaker, sisters Eleanor, Lois and brother Garry.
Cremation has taken place. A celebration of life and committal of the ashes will take place at St. Mathew’s Church and internment at St. Lawrence Valley Cemetery at a later date.
As expressions of sympathy, memorial donations to the St. Mathew’s Presbyterian Church Ingleside would be appreciated by the family.