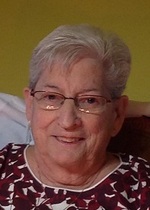 On Thursday May 27, 2021 the girl from Dickinson’s Landing has reunited with her parents and sisters (Margaret, Sheila, Gloria) in heaven. Mona Mae Empey was born on May 3, 1938 to Charles and Mary Empey. She lived in the Lost Village of Dickinson’s Landing until the Seaway was established and the family relocated to Avonmore. There she met the love of her life Gordon Pechie and they were married on August 22, 1959. From then until now there was a life filled with family and friends and many, many memories created. She will be missed by Gordon Pechie Jr. (Laura) and their children Brandon, Christopher, Heather and Stacy. Susan Seymour (William) and their children A.J., Holly, Bella, predeceased by Jade. Margaret Durocher (Carl) and their children Jason (Charlotte),Rebecca, Stephanie and Micheal. Great grandchildren Sophia and Aubrey. To honor Mrs. Pechie's wishes, cremation has taken place. A private graveside service will be held at a later date at St. Lawrence Valley Cemetery. As expressions of sympathy, memorial donations to the charity of your choice would be appreciated by the family. Online condolences may be made at www.brownleefuneralhomes.com.